There is a good chance I'm wrong.

I don't know about  you, but I've done some 360's when it comes to my beliefs, opinions and understanding a on a variety of subjects.

Every time I  come to a realization that my understanding of something is limited or my mind opens to another way…. it's usually  a difficult transition.  There is this in between "UGHHH!" especially when it comes to the most ingrained ideas.  However I care more about evolving and serving my highest good (which includes my highest impact on the world) than I do about being right or being loyal to a belief system. So I'm willing to change, even if  others judge me for it. Even if it means making a hard choice.

The more the process happens the more I accept the idea  that my current beliefs and opinions are most assuredly flawed in some way.  Somewhere I'm lacking knowledge.  There is something I don't understand.  There is someone else's viewpoint I haven't  yet been able to see.

I could resign myself to not having an opinion or beliefs, but I think that would mean moving to a monastery and give up all worldly pursuits.  Or I can ACCEPT the idea that I can have a current belief and that it may very well be wrong (at least in someway.)

Contrary to popular belief, acceptance doesn't mean giving up.  Acceptance however, at least in my experience,  both brings me freedom and consequentially joy as well as it makes me more powerful at making positive personal change and change in the world around me.

One way this has played out  for me lately is how I have applied the idea to my beliefs about other people.  I saw a meme the other day that had these three questions…"is it true? is it  kind? is it necessity?" Since I saw it,  I have been using it as a filter when a judgment about someone  pops up. I am noticing that the very first question is most often as far as I have to go. 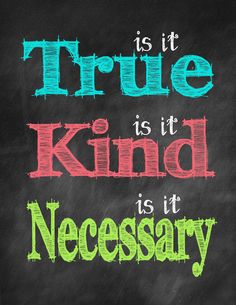 Yeah I generally like to be right. And by I, I mean my ego.  However when I really stop to ask myself if my inferences about the person are 100% right….I  almost always realize I could be wrong.  At the very least it opens up my compassion and I see where they might be coming from.  I can imagine their intention, rather than their action. The next thing that happens is that my heart opens and I love them.  Seriously….this is some serious magic. Gives me chills.

I think the world would be served greatly if more of us opened ourselves up to the idea of being wrong. Clinging for dear life to being right, separates us.  If we are 100% right, that means everyone else is 100% wrong. However simultaneously having our ideas and accepting there are others, both right or understandable connects us to each other.  Being right won't save anyone, it’s the possibility of being wrong that allows us to progress, to evolve, to do the work that need to be done, to know freedom and most importantly live and be in love in this world.
Email ThisBlogThis!Share to TwitterShare to FacebookShare to Pinterest