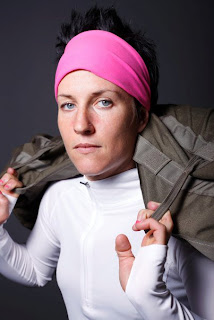 You are stronger than you think. Emotionally, mentally and physically." -Kate Rawlings

Kate “Killer” Rawlings is a professional CrossFit Athlete, endorsed by Reebok and the Owner of a CrossFit Affiliate, Coca Crossfit in North Ridgeville Ohio. Kate was an athlete in college but in the years after graduating gained 80lbs. Kate found CrossFit and not only got back in shape but made it to the 2010 CrossFit Games(only the top three athletes in each region make the cut)

I first connected with Kate Rawlings when I was gifted by a dear friend (and past Radical Woman Q&A subject), Cheri with a Radical Hateloss Sponsorship of Kate on her CrossFit Games T-Shirt.

Cheri says,
“I read about Kate and totally identified with her story. Active up until college graduation, desk job, sedentary -- then boom, next thing you know you're living in a body you don't even recognize. I have SO been there.

When I found out about her t-shirt fundraiser, at first I was just interested in ordering a shirt. And then I had the idea that I knew of a message that was worthy of being spread, and I could do that in support of an athlete who I felt would understand that message. I wanted Kate to go to the Games, and I wanted the world to learn more about Radical Hateloss. And so I emailed Kate and the rest is history. :)”

Cheri gets the prize for the coolest and most awesome gift I have ever received. Along with that gift has come a connection with an amazing athlete and coach who “understands the message”

Without further ado, a Radical Woman Q&A with Kate Rawlings.

How did you make the transition, mentally and emotionally speaking from overweight former collegiate athlete to CrossFit Games competitor?

When I started CrossFit I simply wanted to get healthy. At 24 years old and almost 190lbs I knew that I was on a bad path. It wasn’t until I went to my Level 1 Certification in November of 2008 that I was exposed to people outside of my box. We tackle Fran and I had the fastest women’s time. It was that moment that I thought I should try competing.

I bunkered down, started zoning and increased my training intensity. I DNF’d a wod at my first CrossFit Regional and almost hung it up, but 2010’s Sectional was at the Arnold Classic and I couldn’t pass up that opportunity. I headed into the Central East Regional hoping to finish top 20. After the first workout I was in forth place and there I sat all weekend until I finished just far enough ahead of Becky Conzelman to earn a spot at the 2010 CrossFit Games. 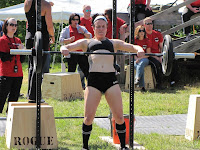 I must say I wasn’t mentally or emotionally ready for the 2010 CrossFit Games. I had doubts about my abilities and was still trying to figure out how I had gotten there. Heading into the 2011 season I was finally feeling like I deserved to be at the games when I broke my back. 2012 I feel like I’ll finally have all my ducks in a row so to speak.

What did you learn from breaking your back and not being able to compete this year?

As strange as it sounds breaking my back forced me to slow down significantly. It gave me a chance to focus on building my box, Coca CrossFit and really focus on why I started CrossFit, to improve my health. Competing is just a bonus. It helped me put it all into perspective. I had become so consumed with competing that I lost sight of why I fell in love with CrossFit in the first place.

What are universal truths do you believe about food, eating, & fitness?

Food’s truth: Crap in, Crap out. Meaning if you’re eating crap your performance will directly suffer.

Eating’s truth: Food is fuel. Change your relationship from eating for enjoyment to eating for performance and survival.

Fitness’s truth: Don’t wish it was easier, wish you were better – Rohn. There’s always an easy way out, but choosing not to take it will make you a stronger person mentally, emotionally and physically.

What role does self-love and acceptance play in your health and wellness?

HUGE! I have said it before and I still struggle with it… body image issues. I’m constantly fighting the urge to want to lose weight so I have a ripped six-pack when I know I make the most strength gains carrying a few extra pounds. CrossFit isn’t about who looks the best, it’s who’s the fittest. That comes in all shapes and sizes. Accepting myself with all my flaws has made me not only a better athlete, but a better coach, friend and role model.

You are not just an athlete, you are a coach & a trainer. What have you learned from the athletes you train?

As a trainer and affiliate owner I have the opportunity to impact someone’s life every single day. I have learned more from my athletes than I could ever explain. I see them grow and push themselves day after day. I see a sparkle in their eye when they do something they’ve never done before, and I chase that high every single day.

What advice do you have for the women out there, which have lost a level of fitness they once had?

It’s NEVER too late. Regardless if you were an Olympic level athlete or you’ve never worked out a day in your life, there’s an athlete inside you and given the right motivation you can get it to come out.

If you had the opportunity to communicate one vital message to all women, what would it be?

You’re stronger than you think. Mentally, emotionally and physically.

What makes you radical? 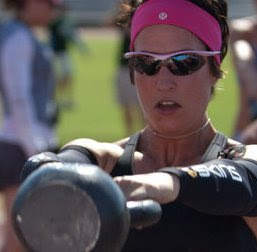 Radical? hmmm. I would have to say that one thing that makes me radical is that I have been open and honest about my life’s triumphs and defeats on my blog, katerawlings.com. In a society where most people worry about being or portraying something I just am.

Awesome, thanks for posting this! I'm a 30 year old woman who has struggled with disordered eating and body image for years - I've been doing CrossFit for the last 6 months and it's been a revelation. I won't lie and say that it's solved everything, but it's amazing to be part of a community that focuses on strength, not skinniness, and I'm developing a whole new respect for my muscular thighs, and learning that I'm tougher than I ever thought.

How To Get A Six Pack In A Month said...

The changes are truly inspiring. How I wish I shared her determination and drive for self-improvement.

Even though looking fashionable is not difficult, many men struggle with it. Whether it’s casual Friday at the office, going on a date or enjoying a BBQ with a group of friends, looking your best gives you confidence that your peers will notice. Once you get the hang of it, your friends may even come to you for advice on how to look great every day and this is really an awesome stuff in the casual wear.
http://www.apparelnbags.com/athleticwear-athletic-t-shirts.htm

Your blog has nicely placed all the points.I really liked the way.Can you suggest me the brand which got best shoes for crossfit !It will be an honour to get feedback.

In India, much of fashion has been influenced by the Hindi Film Industry, popularly called Bollywood. The trends that have changed through time can be fairly seen in the movies made during the 60s and 70s and how they have evolved in various forms bringing about a style that can be followed by the general public. People have aped the west from very early times and this was no exception.